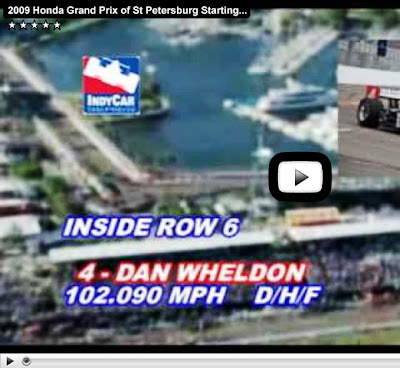 On a beautiful West coast of Florida day, the 2009 IndyCar Series got under way. Watching the race on VERSUS and seeing commentary on Twitter provided a unique way to experience the beginning of one of the most longed for seasons in North American Motorsports in recent years.

Today held out a great hope for a grand showing for all of the teams to race with an amount of parity. Ever since the rushed merger last year, many fans that followed the ChampCar World Series and the IndyCar Series wondered if this would all turn out to be good for the sport of open wheel automobile racing?

Ok! So Penske Racing won another race, but the 100 laps that made up the race, and the practice and "Knock-Out" qualifying sessions that took place before today, paid many dividends to the fans from both cultures that have now become one.

The following "Tweets" were excerpted and edited from Twitter via TheEDJE account during the season-opening Honda Grand Prix of St. Petersburg:

Tweet: VisionRacing - Vision cars are on the grid. Crews are in their firesuits. Nice little breeze to stop them from melting on the spot.

Tweet: VisionRacing - For the record, black firesuits are NEVER a good idea but it was short notice + all. Poor Vision 21 crew. They look good but are withering.

Tweet: FilipCleeren@VisionRacing I hope you supplied 'em with loads of black towels as well.

Tweet: VisionRacing - Vision drivers have um... Taken care of business (aka gone potty) and are now at their cars. TMI?

Tweet: TheEDJE - Five wide - Franchitti swoops to the lead! Gets passed by Justin Wilson. TK punts Rahal off of the track! Sonny's BBQ in the lead.

Tweet: TheEDJE - Restart - looks strong - TK trying to make up ground after pitting to get a new nose. Rahal doing the same.

Tweet: IndyCarPR - Report from pit lane: #24 has gone behind the wall to repair damaged suspension.

Tweet: TheEDJE - AGR's Hideki Mutoh is first in on pits to change from Reds to Blacks on tires - Viso in because the Reds were a problem.

Tweet: VisionRacing - Ed told by engineer Jeff Britton that they will opt for primary black Firestone on next stint instead of Reds as originally planned.

Tweet: IndyCarNation - At lap 25, Justin Wilson leads Darion Franchitti. Pole sitter Graham Rahal has fallen back to 15th due to an early incident.

Tweet: TheEDJE - Justin Wilson on Reds for first stint hoping to get 30 laps. Dario Franchitti on Blacks with leading by 1.2 seconds. LAP 26

Tweet: FastMachines - It is so nice to have good pit reporters this year for Indy Car. #indycar on VERSUS

Tweet: VisionRacing - 10 laps to pit for #20 menards car. Mutoh behind but Ed is running same lap times as him.

Tweet: TheEDJE - Rahal is waiting to punt TK ... or at least pass the AGR driver. LAP 29

Tweet: IndyCarPR - update: Full Course yellow for contact in Turn 12 between #7 Patrick and #2 Matos. #5 Moraes had the incident in Turn 4.

Tweet: VisionRacing - Before pits open Ed will be in 14th place in 20 Menards car after all the incidents. Will take on black tires.

Tweet: FastMachines - Tagliani tangled with Meira & has a flat. Matos just took out Danica in a big crash. Moraes out too. #indycar craziness on VERSUS

Tweet: TheEDJE - Patrick pinches down on Raphael Matos. Tagliani gets tagged - flat tire. Briscoe in and out of the pits. YELLOW Flag - Briscoe takes lead.

Tweet: VisionRacing - RHR took on Red Firestone tires on his stop just as the caution flew.

Tweet: IndyCarPR - Leaders pit under caution. #9 has terrible stop after crew can't get fuel hose to the car.

Tweet: VisionRacing - RHR being told to save as much fuel as possible so Vision can shoot for a Top-5.

Tweet: VisionRacing - RHR up to P4 as he was pitted legally just as yellow waved. Great timing for 21 Vision team.

Tweet: VisionRacing - Ed finds himself in lucky P13. Has understear through turns 1, 2+5.

Tweet: TheEDJE - Restart on Lap 39 - Briscoe leads the field, Doornbos and Franchitti are getting into it!

Tweet: VisionRacing - Wilson got past RHR. RHR now in 5th

Tweet: MyNameIsIRL - Wheldon in 2nd. On a street course. Who saw this coming?

Tweet: TheEDJE - LAP 50 - Near halfway, top cars are running smoothly and in order nose to tail. Franchitti in 6th, Rahal in 7th.

Tweet: VisionRacing - Vision team is staying out during this caution. 1 to go at the line.

Tweet: TheEDJE - Restart - LAP 57 - looks racy against Weldon who is in second, led by Briscoe.

Tweet: MyNameIsIRL - Congrats to Stanton Barrett for not taking anyone out today. He was the lone GT 2 entry.

Tweet: FuriousWedge - I'm really wondering what would have for Briscoe if he could get around Wheldon who seems to be just quick and wide enough to stay P2

Tweet: TheEDJE@FuriousWedge I think that the Dale Coyne Dallara and Wilson have the Hot Sauce!

Tweet: VisionRacing - Teams coming in for their finals stops.

Tweet: VisionRacing - No.21 Engineer Neil to RHR : " It's all yours from here Buddy"

Tweet: FastMachines - Last round of Indy Car pit stops already? Time flies when you are having fun. #indycar on VERSUS

Tweet: TheEDJE - Justin Wilson stays out in order to build up a gap from the pitted leades. Franchitti, Rahal in - Dario takes Reds.

Tweet: VisionRacing - Ed running 3rd heading into pits. Will cycle back... but still. Nice to say that.

Tweet: TheEDJE - Wilson goes into pits and comes out AHEAD of Briscoe ... and on cold tires! A run to the end.

Tweet: FuriousWedge - What a great stop for Dale Coyne Racing! and Carpenter is in the tires we go yellow with parts scattered on track

Tweet: VisionRacing - Ed is in the tires. He's fine. Apologies to team. Engineer Jeff Britton assures him he did a good job. Made a lot of progress this weekend.

Tweet: VisionRacing - RHR asked team if he should be saving fuel under yellow. Team says no. We are good to go.

Tweet: FastMachines - What a thrill it would be if Justin Wilson could give Coyne his first win in the big cars!! #indycar on VERSUS

Tweet: TheEDJE - Franchitti loses a couple of spots! Justin Wilson shows why he was the class of the CCWS Transition Players.

Tweet: TheEDJE - Weldon gets booted to sixth - Reds vs. Blacks - into the tires - YELLOW Flag.

Tweet: FastMachines - Dixon hit the wall pretty hard and is out of the Indy Car race. A tangle with Mutoh didn't end well. A tough weekend for Scott. #indycar

Tweet: IndyCarPR - Lap 81: Full Course Caution for #9 Dixon who hit the tire barrier in Turn 3 after making contact with Mutoh in Turn 1.

Tweet: VisionRacing - RHR is in third spot and does not need to pit again. Lots of happy people in 21 Vision pits no matter how he finishes.

Tweet: TheEDJE - Sixteen laps to go and Dale Coyne (and all the former CCIC fans) are feeling the pressure - can Justin Wilson do it?

Tweet: TheEDJE - Penske and Briscoe pass in turn one on restart - many other drivers pile up after the corner - 6th caution.

Tweet: MyNameIsIRL - The storyline may have just shifted from Dale Coyne to Tony George winning his first IRL race. Wow.

Tweet: FastMachines - Doornbos made a bonehead move on Wheldon, took him out. 12 to go, under FC yellow. #indycar on VERSUS

Tweet: TheEDJE@VisionRacing - RHR - Great grab of a driver for Vision!!!

Tweet: FuriousWedge - The best part about VERSUS; 10 minutes to 5pm yet not a single bit of talk about a timed race : )

Tweet: IndyCarNation - If you are watching Race Control...SORRY!!! Good news is that it got better, bad news is that there are a TON of things to do.

Tweet: MyNameIsIRL@TheEDJE Agreed, a great race so far. I just hope we have a little passing here at the end.

Tweet: TheEDJE@MyNameIsIRL Boy, who would have thought of the changes in this first race. Great first race so far - its not over!

Tweet: VisionRacing - RHR challenging Ryan Briscoe for the lead!! How many friggin' laps to go???

Tweet: TheEDJE - One lap to go and it is nose to tail for the first 7 cars!

Tweet: TheEDJE - Briscoe WINS, RHR with his new Vision ride second, and a Transition Player on the podium with Justin Wilson for Dale Coyne! WOW!

Tweet: FuriousWedge - That would be 9 different teams in the top 10; Congrats to Briscoe and also Hunter-Reay, .. and Stanton Barrett finishes 12th!

Tweet: MyNameIsIRL - Congrats to Briscoe, even though he totally spolied two fantastic storylines. No hard feelings though.

Tweet: VisionRacing - RHR out of car congratulated by TG and ED. About to do VERSUS interview. Stay tuned!!

Tweet: VisionRacing - Ryan: "That was a really physical race. Can I have some more water. I almost had Ryan Briscoe. I wanted to try. Unreal day."

Tweet: TheEDJE - Dale Coyne stated that this race shows that Sonny's BBQ has a faster drive-thru than McDonald's

HOW THEY FARED (** denotes Transition Player merged from CCWS):

It was thoroughly enjoyable to experience the race together with other journos/bloggers and even team members.

Twitter is showing its great potential here and I'm happy to see the IRL paddock is picking up on it.

Great idea to put the "tweet-history" up here!