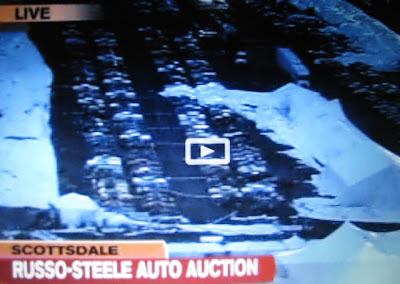 “There are downed electrical lines in there, wires, cables, propane heaters and canisters, broken glass, etc.,” Drew Alcazar, founder and co-owner of Russo & Steele, said in an interview Friday afternoon. “We hope to be allowed back in the site by Saturday morning. If we can, we’d like to reopen the auction Sunday, and maybe extend to Monday if there are enough interested owners and buyers.” /// About 600 classic automobiles, including the car that has perhaps piqued the most curiosity at this year’s Arizona collector car auctions — a 1948 Tucker 48 convertible — were in the tents at the time, Mr. Alcazar said. Image Credit: azfamily.com

After a successful and enjoyable breakfast gathering for inside auto-enthusiasts and members of the press, the day began well for the folks over at the Russo and Steele.

Russo and Steele in Scottsdale is a standout against the well publicized "No-Reserve" policy of the other major auction held this week at Barrett-Jackson, in that they hold an auction where all cars are held with a Reserve. This auction operation believes that quality consignments are the result of only two scenarios; either the owner had paid a premium or has endured a costly and laborious restoration. Neither of these two will entice this caliber of automobiles to simply be “sold to the highest bidder – regardless of price” ... hence, "No-Reserve".

These consignors want “top dollar” for their car. The challenge all auction companies face is how to attract quality consignments and consign them with appropriate reserves that will be well received by our knowledgeable bidders. A car does not get sold unless it meets the negotiated minimum price - The Reserve.

But the Russo and Steele auction, which began on Thursday, was interrupted that evening by one of the most severe storms the area has experienced in years. Winds tore at two of the tents the company was using to house cars going to auction, collapsing one of them and sending parts of the other blowing onto the nearby 101 Freeway.

This excerpted and edited from Examiner -

The tents that collapsed were side structures. Thankfully, no one was injured as most attendees were busy watching the action in the main tent. Between 5,000 and 10,000 people were in attendance at Russo & Steele when disaster struck at 6 P.M., according to AZFamily.com.

Russo & Steele Auction was immediately evacuated. Even car owners had to leave without knowing the fates of their valuable classic rides. It is believed that several cars were damaged.

Arizona state governor Jan Brewer declared a state of emergency due to the extensive impact the severe storm has had all over the state.
Reference Here>> 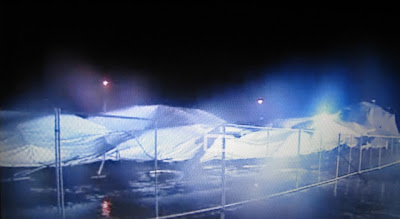 In Scottsdale strong winds have blown over two tents at the Russo-Steele Auto Auction. The auction had to be evacuated and there is major damage to the tents. There were no injuries reported. Most people at the auction at the time were inside the main tent, which is still intact but two other tents were destroyed along with a lot of expensive cars. What was left of the massive tents at the annual auction in north Scottsdale continued to flap violently in the wind leaving the auction cars exposed to the harsh elements. A lot of the collectors' cars have spent years in garages and have barely seen any kind of weather, let alone a fierce storm. Image Credit: azfamily.com

And this excerpted and edited from the New York Times -

McKeel Hagerty, president of Hagerty Insurance, which specializes in coverage for vintage cars, said he had surveyed the auction site from a distance. He said he estimated that perhaps as many as half of the 600 cars had suffered at least some damage. “You can see that some of them have been extensively damaged,” he added.

Was this the worst disaster the classic car industry has suffered?

“Hurricane Katrina was worse,” Mr. Hagerty said. “We lost 500 to 600 classic cars in that one. But, other than that, this is the worst I can remember.
Reference Here>>